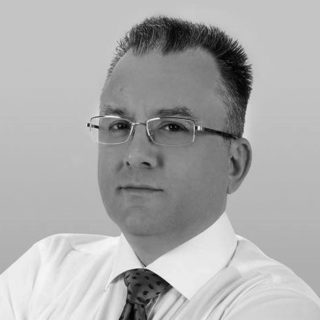 Athanasios Kosmopoulos was born in Thessaloniki. He attended the Corps Officers Academy (SSAS), from whom he graduated as military lawyer with the rank of second lieutenant, leader of the class of 1987.
During his parallel studies at the Law School of the Aristotle University of Thessaloniki, he specialized in International Law. He studied at the Academy of Computer Programmers of the Armed Forces, in which he later taught. He was trained at the Paratroopers School as a static belt parachutist as well as in other military intelligence and Special Forces schools in Greece and abroad.
He taught as a lecturer at the Department of Information and Communication Systems of the University of the Aegean in Karlovasi, Samos, and served in field and executive positions of the Armed Forces, Hellenic National Defense General Staff, the Special Forces of Paratroopers and the National Intelligence Service.
He holds an LL.M in European Law and Politics from the Uninettuno University in Rome.
In 2000 he resigned at his request with the rank of Major and was recruited by the Department of Organization and Management of European Funds of the Ministry of Development, as a legal adviser.
He served as Governor and Chairman of the BoD at the largest hospital in the Balkans, at the Psychiatric Hospital of Attica in Dafni, between 2004 and 2010 with 3,300 employees and 1,500 active beds.
Since 2010 he has been the Head of Organization and Support of the Executive Agency of Information Technologies of the Ministry of Development, transferred to the Ministry of Digital Policy by the moment of its establishment.
In May 2018 he was appointed as Data Protection Officer of the aforementioned Ministry. Visiting Lecturer and Evaluator at the Hellenic National Defense College.
He speaks English, French and Italian and is formerly elected Vice President of the Hellenic MENSA.
His research interests concern hybrid threats, geopolitics and legal issues of data protection and disinformation.